Organizing an office game show is a great way to improve team morale and help everyone blow off some steam after a stressful day at work.

As part of a broader team building initiative, game shows are also highly engaging and everyone on your team will be happy to participate.

If you’re looking for a list of game show ideas for work that will keep your team engaged till the end, you’ve come to the right place.

Here’s our curated list of top 10 awesome game show ideas for work that require little to no effort to prepare and launch.

Jeopardy is one of the most popular game shows for playing with friends at home or coworkers at the office. Not only does it bring some friendly competition to the workplace, but it also gives people an opportunity to showcase their knowledge of random trivia.

The premise of the game is that three players participate in a question-and-answer session, competing to answer more questions correctly than the opponents.

To play Jeopardy in the office, you’ll first have to set up a game board. You can use an actual whiteboard in your office or go digital and use a PowerPoint presentation. You’ll also have to host the game and come up with interesting categories and questions.

If all this prep work sounds like too much of a hassle for you, why not go with our The Official Jeopardy!® – Virtual Game Show team building activity? Let us deal with coming up with customized questions, hosting the game, and taking care of all things technical while you enjoy participating in the game.

Minute to Win It is another fun and exciting game based on a television show. If you’re looking to bring more laughter and excitement to the workplace, this is one of the easier games to play at the office.

The concept is simple – your teammates have to use common household or office items to complete simple challenges. As the game progresses, the challenges become more difficult and only the most creative and determined team wins.

This game can be played in groups, teams, or by individuals and in both virtual and in-person settings.

Regardless of your current working environment, TeamBonding makes it simple and easy to play Minute to Win It with your team. Our In It to Win It spin-off event will bring excitement, laughter, and some friendly competition to the workplace with unique 60-second challenges that your team will have fun solving. Win, Lose, or Draw was a game show that aired briefly in the 80s. The gameplay is pretty similar to Pictionary.

Teams take turns trying to guess a phrase, title, or thing based on the drawing of one of the team members. There is no talking, so you’ll have to rely on your creativity and drawing abilities to explain the secret phrase.

This simple game format can be implemented in a virtual or in-person setting. As a team building activity, Win, Lose, or Draw can help your team work better as a team, think on their feet, and develop creativity.

Family Feud is an embodiment of quality entertainment for the whole family. Now in its 22nd season, the show still brings in millions of viewers each day.

Two teams compete against each other to test their knowledge of random survey answers.

To play this game at work, split your team into two “families”. The host asks the teams to guess as closely as possible the most popular answers to a random survey question. The team with the most points after all the rounds wins the game.

Not only does this game encourage quick thinking, but it is also a great way to help your team develop their communication skills and social connections.

If researching survey answers and questions seems like a daunting task, TeamBonding offers a spin-off team building game Survey Says! Our facilitators will take care of everything, from building out the questions to hosting the game.

Reach out to us to find out more about customized options that will ensure your entire team stays engaged till the very end. Name That Tune was a popular show in the 1960s and 1970s. Each episode featured a panel of four or five celebrities trying to guess songs being played by contestants who had to correctly identify a certain number of tunes within a time limit.

This game show demonstrates the importance of having a common goal and working as a team to achieve it. In your company, it could be anything from promoting new products, increasing sales numbers, or simply making your website better.

Test your musical knowledge with Wild Card Bingo, our version of the popular quiz show. Fill up your bingo card by naming the tune based on the hints provided.

While this awesome office game show is a way to highlight music preferences between generations, it doesn’t have to be focused only on music. Quiz your team with pop culture trivia, or even personalize the game to test your team’s knowledge of random trivia about the company.

Human Bingo and Team Bingo variations of Wild Card Bingo are fantastic options if you want to encourage teamwork and help teammates get to know each other. To win the game, the players will have to guess things about other teammates or accomplish certain challenges rather than guessing the names of popular songs.

Survivor is one of the most popular reality TV shows that revolves around a group of strangers who are placed in an isolated location.

Contestants compete against each other in adrenaline-filled challenges to avoid being eliminated. Only the strongest contestant both physically and mentally is crowned the survivor.

While the original game is centered around exclusion, TeamBonding’s version of the show Corporate Survivor is all about inclusion. Rather than competing against each other, your teammates have to work in unison and rely on the strengths of individual team members to score points.

Corporate Survivor is excellent for annual meetings, company outings, or big project kickoffs. Reach out to us to learn about available locations and games. 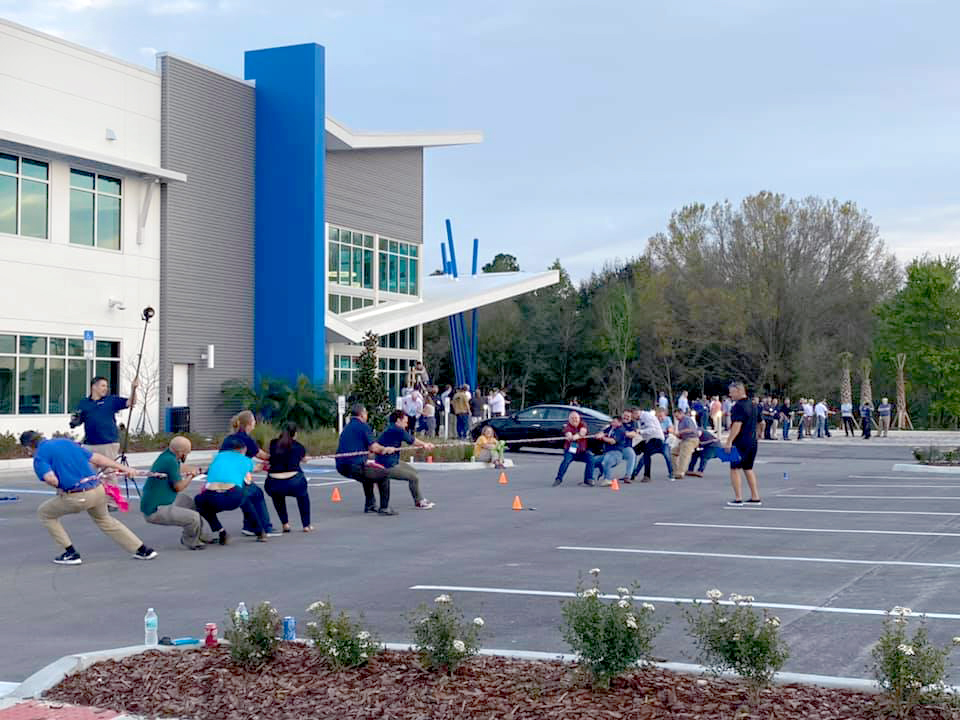 Chopped is a unique cooking television show where chefs compete against each other to prepare dishes using mystery ingredients. The game has three rounds, and at the end of each round, the dishes are scored by the judges.

Chopped may not seem like your typical office game show idea. However, while you probably won’t have time to cook an entire dish, you can modify this activity to fit your time frame and budget.

This doesn’t need to be an in-person event. You can play it virtually on Zoom. But before the meeting, make sure to send each of your team members a box with all the mystery ingredients. Once you’ve set the timer, instruct the team to open their boxes and start cooking.

To keep everyone engaged, ask your teammates to explain what they are making. Since you won’t be able to taste the dishes, you can ask the team to rate each other’s dishes based on how they look.

8. The Price is Right

The Price is Right is a guessing game show that invites people to guess the price of specific items without going over the real price. The person who guesses the closest to the real price wins the points.

This game is easy to set up in virtual and in-person settings. The most daunting task is researching the prices but try not to make it too easy. For example, people will most likely know how much a PlayStation costs but will have a harder time guessing the price of a golf club set, for example.

If you guessed that Common Knowledge is a TV game show about testing your knowledge of everyday trivia questions that people should know answers to, you’ve won 10 points.

Two teams compete to see who can answer the most multiple-choice questions correctly. The catch is that individual contestants must lock in their answers secretly. Once the answers are revealed, the team gets extra points only if everyone has selected the same answer.

To play this game in the office, you would have to come up with some common knowledge questions and a way for the players to jot down their answers. A simple pen and paper will do.

If your team enjoys getting their brains picked with trivia questions but you don’t have time to set up the game, TeamBonding has you covered.

Our Corporate Quiz Bowl team building activity will get the entire team fired up and engaged in showing off their knowledge of basic trivia. If you are looking for a virtual event, Almost Anything Goes is a year-round favorite. We will supply the questions, track the scores, and run the show so you too can join in on the fun.

This is an in-person event that’s perfect for keeping people engaged and entertained at off-site meetings, conferences, celebrations, or ceremonies.

If you haven’t already watched this popular show, the concept of a lip sync battle is simple: two opposing teams compete to see who can do the best lip sync performance to a popular song.

As a team building event, lip sync battles can be great for helping new team members get acquainted with the team, showcase personalities, and increase overall confidence.

Office game shows can make for an exciting and fun change of pace from conventional brainstorming sessions and meetings. If you’re looking to liven up the atmosphere in your office, there are plenty of fantastic options above that won’t break the budget.

For more excellent game show ideas for work, check out our diverse selection of game shows that you can play with your team virtually, at the office, or at an off-site location.

If you need help choosing the right game for your team, reach out to TeamBonding and ask about our customizable game show team building activities.