TeamBonding has been working with the Ingerman team for the past 11 years to co-organize their annual 3-day leadership and training conferences which bring their functionally- and geographically-distributed teams together for work and play.

Back to Case Studies

In business for over 30 years, Ingerman is a development construction and property management company that specializes in developing, building and managing affordable housing in New Jersey, Pennsylvania, Delaware and Maryland. They have approximately 8000 rental units and 350 employees at this time and continue to grow rapidly.

Ingerman staff roles are fast-paced and diverse including real estate developers, corporate office staff, construction crews, property management teams and more. They rely on one another to conduct their work, which is highly regulated by the government, however they are spread out across multiple locations and functions, and as a result do not see one another regularly.

The goals of Ingerman’s annual leadership and training conferences are to further educate their staff members on critical business topics, connect individuals together who normally don’t have the opportunity to interact for mutual learning and networking benefit, and for fun! Everything Ingerman does MUST include humor and fun, it is a major part of their culture. Every year for the last 11 years, Mary French, Ingerman’s Director of Strategic Initiatives who is responsible for planning annual conferences amongst many other things, reaches out to us at TeamBonding and describes that year’s conference theme. On why they keep returning, Mary said, “TeamBonding makes it so incredibly easy to run a dynamic team building event without having to put 5000 hours of labor in to figure out how to make it work because they do it all for you!”

This year’s theme was a circus, so she asked us which TeamBonding event would best pair with that unique theme that is also interactive, high energy (but not physically straining), and includes a little bit of strategic thinking and a lot of humor to keep everyone engaged.

TeamBonding selected the Ultimate Tailgate Challenge event which includes multiple challenges that were customized as games that could be played at a circus.

Teams were setup to ensure that they included a cross-section of staff working across a variety of functions based in different property locations to allow for everyone to interact with people that they may not normally work with, and perhaps have never even met. The event facilitators kept the energy high with active staff participation, enthusiasm and constant motion from activity-to-activity, but not to a point of exhaustion where staff tire out.

“So much of what TeamBonding does is teach people how to engage with a team member without actually saying that.” – Mary

Event participants left in high spirits, already asking, “What are we going to do next year?”

David DeAugustine, Ingerman’s CFO, shared that the conversations held and the fun had by Ingerman staff at the latest TeamBonding event have carried on beyond the event, and have even helped to ease some pressures and challenges within the business.

Mary says this is why Ingerman has continued to work with TeamBonding for 11 years and counting: “It’s just it’s a no brainer. I mean they’re just incredible to work with!”

Sound like fun? Take a look at these activities. In It To Win It – Fun Team Building Games 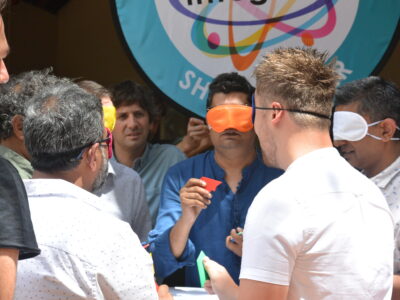