Receiving your first bicycle as a birthday gift or even a Christmas gift is powerful memory that many of us hold dear. However, many children around the country have yet to experience this due to financial hardships. Now more than ever, many families have had to prioritize health and nutrition, and purchasing a bike has become an unattainable luxury.

One of our favorite team building programs, Charity Bike Build helps to fill in this gap.  We work with different companies to provide bicycles to those children whose parents may not be able to buy them one.  After one and half years of being unable to host this event, we have plenty of bikes in stock and are ready to keep giving back!

What is Charity Bike Build? 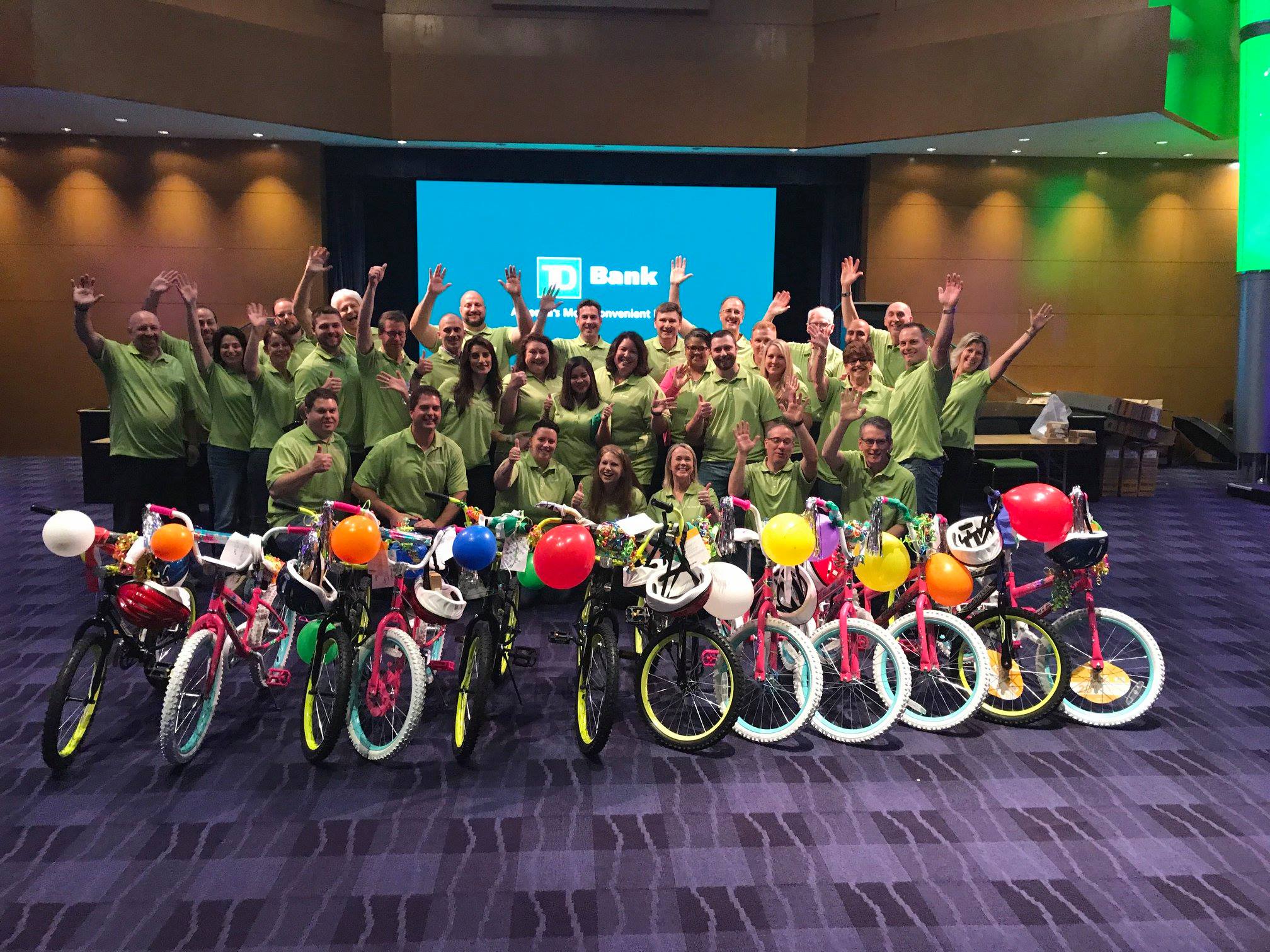 Charity Bike Build was born from the idea and desire to help companies and teams give back to their communities. Over the past few years, we have hosted over 750 Charity Bike Build events, working with companies like Verizon and Nestle. During the team building event, coworkers work together completing tasks and solving puzzles with the end goal of building a children’s bicycle. Often times at the end of the event the children appear to receive their new bikes. For the majority of the children, it is their first-ever bike! Since the start of the program over 12 years ago, we have been helping companies and communities donate over 18,000 children’s bicycles. In 2019 alone we were able to build and donate 2,066 bikes! The Power of Giving Back

Charity team building events are created to fulfill a need in the community, but they can also be a very powerful way to bring your teammates and coworkers together. In addition to the sense of group accomplishment from building something together, there is also the common bond and sense of fulfillment from having made a difference. Often times we hear that the most rewarding part of the experience is seeing the kid’s reaction and knowing that they did something good together. The program itself also encourages several important elements of teamwork including communication and problem-solving skills. It gives teammates the opportunity to listen to each other’s stories and build stronger connections with one another.

Charity team building helps build bonds, strengthen communication skills, and boosts morale while making a positive difference in the lives of people who need it the most. Our charitable team building programs including, Charity Bike Build, are the perfect option for companies who wish to give back while also increasing the bond between teammates.

Plays well with these activities... 10 Awesome Game Show Ideas for Work Organizing an office game show is a great way to improve team morale and help everyone blow off some steam after a stressful day at work. 6 Ways to Acknowledge Employee Loyalty: Leading with Purpose In the wake of the “Great Resignation,” employees are jumping ship on their long-term employers. Companies that haven’t yet adapted to employee demands for remote work flexibility, liveable wages, and a better focus on work-life balance are scrambling to keep up. Valentine’s Day is the sweetest holiday of the bunch. Black History Month, observed each February, is a time to celebrate the lives and accomplishments of all those in the African American community. While we should all celebrate Black History every month, this dedicated time allows everyone to share, remember, and embrace the influence of Black heritage and culture. To celebrate Black History Month, we chose 11 inspiring poems to explore the rich tradition of Black poetry. Although these poems serve as just the tip of the iceberg of what needs to be commemorated, the lasting inspiration of literature allows for the injustices, accomplishments, and thoughts of the black community to always shine and be expressed. Be sure to check out some inspiring Black History Month poems below! Engaging & Retaining Millennials: 5 Ways to Give Them What They Need

How to Engage & Retain Millennials: 5 Ways to Give Them What They Need Millennials are now the largest generation in the labor force, but notoriously the hardest to retain. They crave more gig work, career/life flexibility, challenging work environments, and constant progress in their careers. As we ring in 2022, there is no doubt that we are entering the year with a sense of uncertainty at the workplace. With the ebb and flow of the Coronavirus pandemic comes ever-changing workplace policies. While some companies are allowing more employees to come into the office, some have remained fully remote, and others have adopted a hybrid working model. While some aspects of work have become inconsistent, workplace wellness is the one constant that has followed us through the past 2 years. Follow our 10 tips to promote physical and mental wellness at work this year, whether you are working in person, in a hybrid environment, or remotely. Impossible Goals: What Are They & How To Set Them In 2022

It’s a new year. And while some of you may have set expectations for the year, there may be some of those that didn’t set goals at all. Instead, you’d like to move through the motions and do as you wish throughout the year, especially during a year where unpredictability has become the norm. As we reflect and look back on 2021, you most likely have a few dreams you consistently imagine yourself doing as time passes. Goals that may seem too impossible to reach. Get Back to Giving

Get Back to Giving Corporate social responsibility (CSR) is an intentional choice to contribute to the well-being of society and the local community. There is no one “right” way to go about it and no one “right” answer when interpreting what it means in practice. 5 Fun Meeting Ideas to Motivate Your Team With the start of the new year comes company, client, and team meetings galore. Making meetings fun and engaging is an important part of motivating your team to accomplish great work. No one, virtually or in person, wants to sit through a long meeting without interaction between team members. In fact, that’s what gives meetings a bad name. 5 New Year’s Resolutions for the Workplace

Personal New Year’s resolutions are great but have you thought of your professional resolutions for work? Most of us spend about a third of our lives at work, so positive changes made in the workplace are bound to have an effect on other aspects of our lives.