You Can’t Buy Happiness But a Bike is Pretty Close

I’m Joyce Ngo – public relations enthusiast, student, and currently TeamBonding marketing intern. This summer as part of my internship I will be focusing on social media and bringing the experience of the events and programs we do to the mass public from my perspective. You’ll get a behind the scenes view of what happens before the event and the preparation that goes into it. I’ll be posting blog posts about my observations and experience at each event. Basically, you’ll get to see what Joyce the Intern sees, no fluff. This time I went to a Charity Bike Build.

I’ve ridden a bike before. Not for a few years now honestly, but when I was younger it was a big part of my 6-year-old self’s life. I think that’s true for most kids nowadays still. Learning how to ride a bike is almost like a right of passage. But some kids don’t have the means or access to a bike though and this dream goes unfulfilled for them. Which is why programs like the Charity Build a Bike Team Building Activity that TeamBonding facilitates is so important. TeamBonding works with a charity that will at the end receive these bikes the companies build to donate to children.

They told me that this was one of TeamBonding’s most popular programs and I believed it. Most companies want their time and work to mean something and what better way than to achieve that by donating your hard work to charity? Even with that in mind though, I thought that the participants would be lukewarm excitement at best. I mean who wants to spend their time building a bike? Really, I thought it would be a vibe of “let’s get this done, so I can leave” type of event – I was wrong.

Sure, not everyone was super excited at first, but once they heard that the bikes would actually be donated to kids, there was a certain kind of excitement in the air. The kind you get when you know something good is going to happen and you can’t wait. It was definitely not lukewarm. Everyone was incredibly involved and energetic. It helped that the lead facilitator, Deric Bender, was a pro at hyping people up. They got the excitement and energy needed to really put their all into building the bikes, finishing the trivia questions, and perhaps more importantly decorating the bike and writing a card for the lucky kid that gets that new bike. Everyone was involved in some way or another, whether that was with the trivia questions to earn coins that are used to acquire the accessories and the bikes, or building the actual bike. Each person had a part in their team and all the teams helped each other out too. Most of our programs are competitive,

pitting team against team. While this program is competitive, it had a huge collaborative aspect with the end goal of building these bikes for children.

One of the most exciting parts of the program was the races. Everyone got really into it. Turns out they actually had some really competitive people that

“No, she’s younger and smaller. I’m not going to beat her. I’m not competitive, we’re not, what are you talking about,” a member from team two said about her competitor as she walked her bike up to the start line. 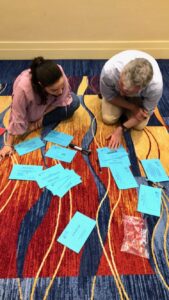 “WOOO! Did I make it? Did I win?” I hear this after she passed me with the most determined look on face as she crossed the finish line.

She beat the other competitor by at least a whole second with the fastest time overall.

As one of TeamBonding’s most popular programs, it’s no surprise that we’ve facilitated hundreds of Charity Bike Builds and donated over 15,000 children’s bicycles worldwide.

As the event wrapped up with decorating the bikes, teams were saying “I hope whoever gets this bike likes the card we wrote.”

This program is effective in its team building aspect with everyone working together and collaborating. It also emphasizes the effect just a few people can have on a much larger part of the community.

It’s one thing to build a bike for the sake of building a bike, but the real motivation in this program is at the end when the bikes are donated to children who without this program wouldn’t be able to have a bike – this could be their first bike ever! Having a purpose allows people to work harder and with more passion than if the work were just for themselves.